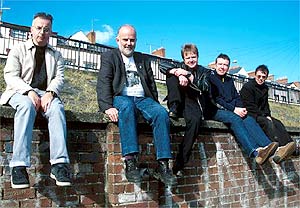 The Undertones‘ self-titled debut album has been the music of choice in my car the past few days. The weather’s been unusually warm this week, and the Undertones are particularly suited to warm weather driving with the window down.

Much has been made of the big single off that album, “Teenage Kicks.” It was BBC DJ John Peel’s favorite song of all time, and he made history when he played it twice in a row in 1978 (being the first English DJ ever to do so). After his death, the box of 142 singles he loved more than others had three copies of the “Teenage Kicks” 7″. And, really… it is, as Peel said, perhaps one of the greatest songs of all time. “Teenage dreams so hard to beat” still resonates with me eight years after I was a teenager. The song’s longing and need just comes through crystal clear.

However, I think the rest of the songs on the album get overlooked in the great hoopla over its great single. “Here Comes the Summer” is one of the best summer songs I’ve ever heard, and it has an organ line, thus making it required listening at any summer barbecue I ever have. Not that I do… but that’s not the point right now. The opening track, “Family Entertainment”, sets the course for the whole album with galloping drums and buzzsaw guitar.

Basically, if you like Ted Leo, you’re pretty much guaranteed to love this album. Both acts share the whole power-pop / punk / garage asthetic. If you like one act, you have to like the other, or you’re being massively oblivious to all that is amazing in music. Catchy, mind-bogglingly perfect songs that manage to be sing-alongs and rockers and dancefloor numbers all at the same time. You want to close your eyes, sing along, and shake your hips, and fuck off to anyone who doesn’t understand.