The debut single from Wisconsin’s the Lonesome Savages, All Outta Love, might be the only thing the rockabilly genre’s produced worth listening to since the first Amazing Royal Crowns LP. It’s an astoundingly original take on the genre, yet draws on enough familiar influences (Charlie Feathers by way of the Cramps) to keep it grounded in some sort of reasonable genre ballpark.

Now, is it three covers and one original? Yes. But it’s not like it’s the first debut release to do so. The Cramps’ Gravest Hits was mostly covers, as was half of the Specials’ self-titled. This is what bands do, if they’re able – when you don’t have enough songs you’ve written, you take the ones you know and put your own sonic imprint on ’em. Let those fuckers know who you are, one way or another, am I right?
END_OF_DOCUMENT_TOKEN_TO_BE_REPLACED

While I appreciate Kerry Davis’ pedigree – what with her work in the Screws, Beehive & the Barracudas, and the Red Aunts – I’ve never really liked her music. I appreciate what she does, but, really, I’ve never been able to get into her projects. It’s either the vocals or the ultra lo-fi nature of them that just fucking grated on my nerves.

Her Two Tears project is … better, I guess? While the least irritating thing she’s done, I’d still just rather listen to the Kills. Davis seems like she’s going for Alison Mosshart’s slinky and trashy vibe, but just comes off sounding slightly wasted. Perhaps if the beat was moved up a touch on “Senso Unico,” putting it more in line with “Heisse Hexe,” this single would have something that grabbed my ears. I understand what she’s going for. “Senso Unico” is a low-down blues number, but it just sounds plodding. And, while “Heisse Hexe” and “Eat People” have more energy, they’re overly repetitive and shrill.

The record comes in a hand-numbered, limited edition of 500, with the first 100 copies on pink/white mixed vinyl, and the remaining 400 on black. 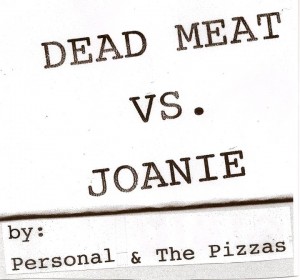 Proper grammar makes the headlines a little longer, doesn’t it? Anyhow, two new releases are on the way that ought to get your excitement up and blood flowing.

First up: Faux Guidos Personal & the Pizzas last put out the singles collection Raw Pie on 1234 Go!, and they’ve finally announced their next release. It’s entitled Dead Meat vs. Joanie, and it’s due out April 15 (Tax Day, for you folks here in the States) via Total Punk Records. You know how punk Total Punk is? They don’t have any presence online whatsoever. Trust me – I checked. I imagine this will be another slab of punk-inflected doo wop garage.

Also due out in April is the full length from the Hussy which features one Bobby Hussy, who is the gentleman running Kind Turkey Records. I’ve heard the LP, Cement Tomb Mind Control, and it’s fucking great. If you thought the two-person garage rock thing was dead, you are sorely mistaken. This might be the craziest thing from two people since they invented sex. It’s coming out on Slow Fizz Records, which (as you can see) does have a website, so this one might be a little easier to get your hands on.

We’ll be posting songs and stuff as they appear online. Promise. 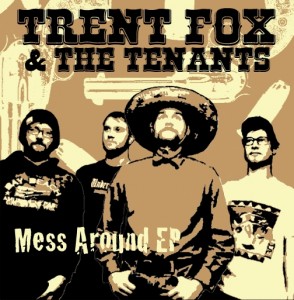 Trent Fox & the Tenants have a surf-inflected vibe to their sound the belies the band’s landlocked status. The Trashmen were from Minnesota, though, so there’s a precedent for the snotty garage this foursome plays. All the songs on the Mess Around EP are full-on party starters, sounding like the Black Lips, but without all the flower power and hipster annoyances.
END_OF_DOCUMENT_TOKEN_TO_BE_REPLACED

One of my favorite garage rock traditions is when the folks singing backup sound like they’ve knocked back a couple of shots before taking the mic. Such is the case in the title track to Trent Fox and the Tenants‘ forthcoming 7-inch, Mess Around. There’s also some excellent surf-styled guitar holding it all together, making for a single that I’m looking forward to hearing all of.

It’s coming out on Wisconsin’s Kind Turkey Records, and being as how the label and band both hail from that state, the release is on Packer-colored vinyl. That’s right: the first 100 are on yellow vinyl, with green labels, to honor the green and gold. The Packers were NFC champions when this went to press, and now they’re Superbowl champions, so this is a nice bit of luck for the folks for fans of the band and the team.

Pre-order’s up now on Kind Turkey’s website, and the record’s due out February 22. If you order, you’ll get an instant download of the 7-inch, and it’ll ship on the 21st. Pre-orders are limited to 70 copies, so I’d get on that pronto, especially if you want the limited Packer colors.

MP3: Trent Fox and the Tenants, “Mess Around”

Organ in a song is a pretty safe way to get me to fall in love with it. Short, choppy guitar riffs are another. “Black Wave,” the first song on the a-side of Wheels On Fire‘s Cherry Bomb EP has both. I think I heard hand claps, too.

Same goes for “Broken Up,” which also sounds like a song the Reigning Sound might steal and cover for themselves at some point. The title track follows in the great tradition of songs with that phrase (see also: Spoon’s “Got Yr Cherry Bomb” and Ash’s similarly-titled tune) and is a tightly-wound hip-wiggler.
END_OF_DOCUMENT_TOKEN_TO_BE_REPLACED