Last week, Columbus, Ohio's kings of garage-punk, New Bomb Turks, released the twentieth anniversary edition of their oh-so-excellent debut long-player, !!Destroy-Oh-Boy!! in a deluxe gatefold edition on Crypt Records. We got pretty excited about it, loving as we do both the Turks and Crypt. The band's been playing a few shows to celebrate the reissue, so we took the opportunity to speak with the New Bomb Turks' frontman, Eric Davidson, about the album, the band's relationship with Crypt, and his new band, Livids.

Was the twentieth anniversary reissue the band's idea or Tim Warren's? We had kind of mentioned it amongst the Turks a couple times over the last couple years, seeing that ominous "20" creeping over the horizon. Then I posted something on Facebook last August about how it'd been exactly 20 years ago since we'd recorded it in NYC, etc., which set off some emails and such, and within minutes Tim was going off about the reissue idea. We were originally thinking of putting a couple of the 1992 cassette demo tunes on a 7" with the reissue, but Tim worried about warping issues, and loved the idea of putting more demo tunes on a 10", so we went with that. Matt came up with the boss idea of redoing the Destroy-Oh-Boy front cover with just the art, no font on it, just a sticker on the outside plastic wrap. Tim asked if I wanted to finally print out the lyrics, so that's on the inner sleeve. John Petkovic agreed to write the liner notes. Tim has really been going crazy with gatefold sleeve reissues on Crypt, and we are more than happy to be one of them!! What's involved in reissuing a record, from the musician's side? For us, mainly reading Tim's funny emails about how trying to remaster it was pointless since he found the "original metal mothers" (the original acetates), and couldn't improve on their sound. (Tim's primary job these days is doing mastering for many cool compilations and 7" reissues, so he really knows his mastering.) Since we weren't remixing or adding extra tracks or anything like that, it was fairly simple from our end, except for some mix-ups with the Destroy LP cover of the first 1,000 coming out way too dark – we're calling it the "Tan Mom Edition." It'll be fixed on future pressings, assuming there will be future pressings. 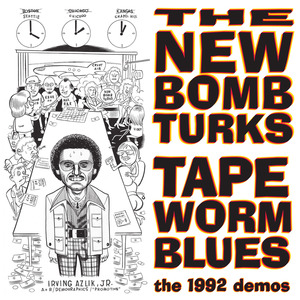 Why put out songs which have been unreleased until now on the demo 10-inch? Is it a historical thing, a curiosity, or just added value? Well, Matt found a few 4-track cassette demos of ours from around 1991-3, more than I remembered we even had, and one sounded really cool, had a couple tunes we had never put on any albums, and figured fans would like to hear it. Once Tim remastered them, they sounded even better, so we figured why not?! I think it's kind of cool coming out the same time as the Destroy LP reissue, because it gives you an idea of how once we got to finally recording the album, we were playing the tunes faster; there's a kind of noticeable slight change I think fans would dig; the lyrics are different, etc. But whatever, it's fun to put shit out there!

Going back to Tim Warren, how instrumental was Crypt in the success of the New Bomb Turks? Very. Very. Again with the VERY. I think we might've lasted for a couple more years, maybe found someone to do an album. But Tim, in his singular way, found this lil' band outta nowhere; and that label already had a good rep in the dive-bar and youth center corners of Europe for having other trusty live bands (Devil Dogs, Nine Pound Hammer, Gories) who'd gone to Europe, so that got us a toe-hold in Europe, and we were able to tour there forever. Crypt was already really respected for great trash rock, so it was so great getting associated with that; and to pat our own back, I think our kind of faster sound and frequent touring in the States helped Crypt develop an expanded following too, I guess. Also, Mike Mariconda and Coyote Studios in Brooklyn (no longer there) were HUGE reasons for anyone giving a fuck about us, because Mike did such a great job nailing down our sound, and keeping us in check as we got drunker and more nervous while recording. What material do you primarily draw from for your live shows these days? I imagine a goodly amount on this set of shows will be Destroy-Oh-Boy, but what else do you hit? We try to do a couple songs from each album, honestly. We'll add a cover once in awhile too. The New Bomb Turks's last release was 2003's Switchblade Tongues & Butterknife Brains, meaning it's been a decade since you released any new material. Are there any plans for the New Bomb Turks to do so, or is the band just too scattered for that to become a reality? Yeah, we "officially" broke up on New Year's Eve 2002 (into 2003). But the subterranean clamor kept coming, so after about 2004, each summer if some good festival in Europe offers us a good deal to play, or some great friend turns 40 and wants us for a birthday party, or whatever, we get together for a few shows a year for fun. I live in Queens, and the other Turks are all in Columbus with kids and solid jobs, etc. So it's hard to plan stuff, we just kind of tackle ideas as they float in. Like bassist Matt Reber has just recently been making the New Bomb Turks site way more interesting. And we've knocked around the idea of maybe totally remixing one of our other albums… But mainly it's getting together for fun shows (the "Independents Day" fest in Columbus on Sept. 21, and opening for the Cosmic Psychos at Ace of Cups in Columbus the very next day, but that is it for awhile). We always say, as long as we feel we can put on a good show, we'll do our lil' summer vacation tours. We don't plan on any new recordings, but who knows… [caption id="attachment_16957" align="alignleft" width="300"] 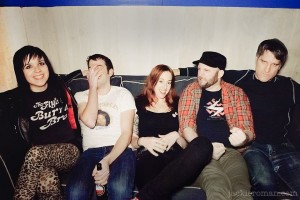 Photo by Jackie Roman[/caption]Various musicians I've spoken with attest to the difficulty of starting a new band, and how it seems like no matter what the success of your last act, a new band is like starting from scratch. How do you balance still playing the occasional New Bomb Turks show, where you're playing to thousands of people in Europe, to playing opening slots in New York with Livids? Well, not every show in Europe is to "thousands" of people. My ego is pretty big, but not so huge that I would worry that Livids "have" to open for some band at a bar on a Tuesday. I probably like that band we're opening for. I'm glad I can still do this, I have fun, and I really love playing with the Livids, as they're all such fine folks. Maybe my feelings would be different if New Bomb Turks had had #1 hits, played arenas, and I'd grown used to seventeen virgins waiting backstage (as opposed to the Turks' usual paultry three).

Livids really burst out of the gate with a stack of singles a few months back. They all seem to have been recorded over a single recording session. Why release four singles, as opposed to an LP? The labels that mentioned maybe doing an LP might've been a little leery because we're not touring all the time; and some labels we really dig asked for singles, and we all like singles, the usual deal. So why not, right? What can folks expect from you -- meaning either band, as well as yourself personally -- after the hullabaloo surrounding the reissue has died down? Livids hope to finish an LP, but not sure when; we've got a short weekend jaunt through Philly, Cleveland, and Columbus from Aug. 15-17; those NBTurks shows I mentioned earlier; I've been very slowly compiling some solo tunes, playing covers with pals; and I'm still doing some freelance writing. And oddly enough, I'll be hosting a re-boot of "Hullabaloo", filmed in a warehouse in Cleveland, with a reunited Death of Samantha as the house band! Seriously. You can check out Livids on Bandcamp and Facebook. You can find New Bomb Turks on Facebook, too, and Eric Davidson on Bandcamp. Order the !!Destroy-Oh-Boy!! reissue (and other things) from the New Bomb Turks' store.

When you hear that Eric Davidson from the New Bomb Turks has a new band, along with a slew of singles you get excited. Such was the news regarding Livids and one of their first releases, the (Some of Us Have) Adrenalized Hearts EP for Oops Baby Records. The press release describes it as a recording which was "banged out." Sadly, it seems like that's less hyperbole, and more a statement meant to keep you from getting your hopes up. The songs are good, if a bit rough, but the recording is more like a really good demo than a proper release. Your initial impulse on listening is that you'd like to pogo around the stereo, but nothing sounds strong enough to really rock you solidly. The title track's a little thin-sounding. The guitars and drums don't have any real heft to them, which is a shame, because Davidson's voice is as strong and sneering as it was during his time with the Turks. The bass work is heavy and thick, but I want those guitars to scream through on parts other than the solos. The thin guitars work a little better on the numbers which run a little faster, like "Nerve-Wrecked." Those punk rock licks work just fine with a thinner guitar tone, but for the rock 'n' roll numbers, you want those riffs to punch, not sound tinny as if they were being recorded from another room. "Theme From Livids" is the only track on here that really has the right tone going for it. The guitars sound like they've got a purpose for being there, rather than existing purely as a counterpart for the bass. "Midnight Stains," another track from the same recording session conducted by Phil Palazzolo, was released by Italy's Goodbye Boozy right around the same time as Oops Baby put this one out, and the same guitar problems plague it, as well, making this less of a pressing issue, and more of a mixing or recording one. If you watch live footage of the band, even the relatively lo-fi audio in the YouTube clip manages to have some clear and true guitars. Usually, I'm one to allow for a band's growth, and lord knows I want this band to do well, but I'm thinking they might not have needed to rush into the studio so quickly, or at the very least, might have gone with a different engineer. The songs are here, and they could be real rockers, but it's just a bit of a letdown. That being said, the songs are good, even if the recording sounds subpar. You can snag the EP from the Oops Baby store, with a pressing of 500 on black vinyl for $6, or spring for the limited-to-100 pressing on blood splatter for $8.