Live on the BBC’s Later… With Jools Holland, this is a much better recording of the recently-reformed Specials than the bootleg tracks from their special guest appearance at Bestival last year. As you can tell, they sound much better with Terry Hall than the reunion shows they did in the ’90s with Roddy Radiation and Lynvall Golding doing all the vox. Still not quite the same as having Jerry Dammers in the band, too, but he’s kind of a stuck-up git and thus, it’s better than nothing.

“A Message to You Rudy”

My router died.
Then I took a couple days to get a router.
Then it wouldn’t work.

Sorry for the absence.

To make it up, you can go right here and watch / download / listen to the Discovery Channel‘s “The World Is Just Awesome” promo. This would otherwise be known as “that Discovery Channel ad with the ‘boom de ah da’ song.”

Goddammit, why didn’t anyone tell me they were making an animated version of DC‘s New Frontier? I didn’t know anything about this until I read it over at Popcandy this evening. Crap. Now I’ve got a DVD, two trade paperbacks, and a series of action figures to purchase.

However, it looks like the Grammy Awards are going for some serious novelty team-ups that will draw people in to watch what is (as demonstrated above) a mostly out-of-touch group of old folks voting for safe, boring music. I guess the Eminem / Elton John performance worked so well that it seems that’s pretty much all they’re doing this year.

It seems that the Grammy people really don’t seem to understand much about what makes stuff work. When you have Elvis Costello, Bruce Springsteen, and Dave Grohl performing a tribute to Joe Strummer, that makes sense. Those are all folks who were influenced by Joe Strummer, and whose music is somewhat connected to his legacy. Eminem, who at the time of his performance with Elton John, was under fire for homophobic lyrics. Getting onstage with perhaps the most famous gay icon alive does a lot towards proving some points. Madonna and Gorillaz? With Gorillaz essentially doing the same thing they’d done earlier that year at the MTV Europe Awards? Pointless.

This year seems to be a lot of stunt casting. While I somewhat understand Foo Fighters playing with a symphony on a version of “The Pretender,” and can almost justify having John Paul Jones as a guest conductor, Carrie Underwood, Mary J. Blige and Aretha Franklin as part of a gospel tribute just seems like trying to pander to three generations and two social groups at once. John Fogerty, Jerry Lee Lewis and Little Richard will perform in a unique “Cornerstones of Rock” segment that seems like an attempt to flog a dead horse. Why didn’t they do this last year when Fogerty was on Lewis’ Last Man Standing album? It just doesn’t make any sense to me, dammit. Still… much as it pains me, seeing Rihanna perform with the motherfucking Time sounds pretty damned cool.

The commercial for the new Cadillac STS features Hum‘s “Stars.”

See for yourself. It’s neat.

I’ve since given up on my opinion of commercials featuring bands I like as bad. I actually would prefer to hear “Stars” or something like that when I’m in the middle of Iron Chef America. Getting to regularly hear the one of the few songs that I’ll sit in a car with no air conditioning in mid-August to hear all the way through to the end isn’t exactly a bad thing. I had a friend in high school describe it as “proof that boys can make rock music, but still sound pretty.” There’s something to be said for pretty rock music, kids.

The alternative is Godsmack. And nobody wants that.

Yo Gabba Gabba is, quite possibly, the greatest show on the face of the planet. It’s a kids’ show hosted by a guy named DJ Lance Rock, has FIVE monsters, and was co-created by by MC Bat Commander of the Aquabats. Really, could this show get any better? The concept alone is enough to make me touch myself innapropriately.

But it does get better! The show has thus far featured performances from the Aquabats and the Aggrolites, Biz Markie, and the Shins will be on the show later this season, among other artists. The sad part is that the show airs at 9:30am, Central Time… which means I won’t be able to catch it unless I want to A) quit my my job and B) be amazingly late to class.

On the bright side, however, there is the magic of YouTube. Check it: 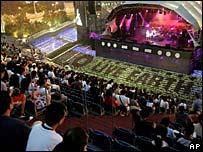 Live Earth seemed to make a big “huh?” as far as global awareness of anything (including, it seems, Live Earth itself). However, Madonna got a lot of flak for performing, being called “a climate change catastrophe.”

Personally, I wouldn’t even care, except for the fact that I discovered the video below while futzing around on Punknews this morning. Seems Madonna managed to round up some credible backing performers again. This go ’round, it appears she was able to convince Gogol Bordello to back her on “La Isla Bonita.”

Great. Not only is one of my favorite bands backing an aging pop star, it’s not even on a good song. Fuckers.

Man, their new album Super Taranta is kind of weak, too. Yeah, they just got a good deal with Gypsy Punks, but there’s a good two and alf albums’ worth of stuff before that which is just as good. Sophomore slump, this is not.

While watching wrestling Monday night, they were running the ad for EA Sports‘ MLB 2007 with disturbing regularity. That’s not odd – every two-hour episode of RAW has a tendency to show the same six or seven commercials to death. What grabbed my attention was the music that the ad featured – Nirvana‘s “Breed.” Yep, Nirvana. In a commercial.

Now, I’ve heard Iggy Pop‘s heroin ode “Lust For Life” used to shill cruises, the Specials‘ “A Message to You Rudy” selling diapers, and the Kinks pushing printers. However, I officially feel old now. Christ on a crutch – I think I understand so many older folks’ outrage regarding the whole John Lennon / Nike “Instant Karma” hoopla.

I mean, I oughtn’t be surprised – Pitchfork had this as news weeks ago. I’m just shocked, that’s all. Even as distastefull as I find her, I never in a million years thought Courtney Love would stoop this low. Yes, the botched With the Lights Out box set ought to have signalled something was amiss, especially considering the commercials they were running for the damn thing.

However, this is about as surprising as the first time I saw that commercial with the Circle Jerks. At least in that case, they were selling sneakers. Nirvana and baseball? It just doesn’t mesh…

If you are still choosing between Halloween costumes for this year then if you are a sci-fi fan Star Wars costumes could be a possible idea for a costume that would fit your personal interests, as well as the fact there are many Star Wars costumes to choose from.

Two interesting stories in the news today about band names. First, Supernova has won an injunction against the producers of CBS‘ Rockstar: Supernova. The judge ruled that the “group is enjoined from using the Supernova name for performances and recordings.” Basically, the original group filed the lawsuit as soon as the show was announced, and the legal ruling was reached as the show’s finale was being taped. Literally, last minute shit. Should be interesting to see how it turns out.

Next up, it appears that Scottish indie rockers Idlewild aren’t too thrilled about the new Outkast album that bears the same name. Nevermind the fact that the Outkast album / movie Idlewild takes its name from an African-American resort town in Michigan and the band takes its name from a setting in Anne of Green Gables. The band’s just pissed that there’s an album that uses their name. Never mind the fact that bands use songs as band names, band names as album titles, album titles as band names, lyrics for everything… all the fucking time.

Watch the video for “Idlewild Blues” below… 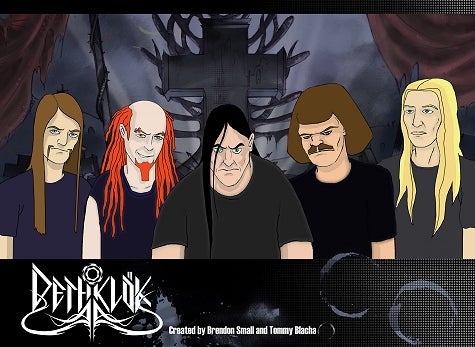 The stars of the new [adult swim] show Metalocalypse might not be a real band, but Dethklok is one of the best metal acts playing today. And they’re animated.

Kind of a cross between Spinal Tap, Iron Maiden videos, and those weird Swedish metal bands where they kill each other, Metalocalypse chronicles Dethklok’s (mis)adventures in a way that seems a bit too much like a documentary. They even have a fucking MySpace page.

But the songs are amazingly hilarious, especially the recent “Dethday” episode’s birthday song, which has now supplanted the Vandals‘ “Happy Birthday to Me” as my favorite birthday song. The fact that the first episode revolved around a coffee jingle and the band’s attempts to cook following the unfortunate death of their chef is perfect fodder for humor. The fact that the jingle which the band recorded does not label them as sell-outs, since it was in an effort to make “COFFEE METAL!” (said lead singer Nathan Explosion) is just the fucking icing on the cake.